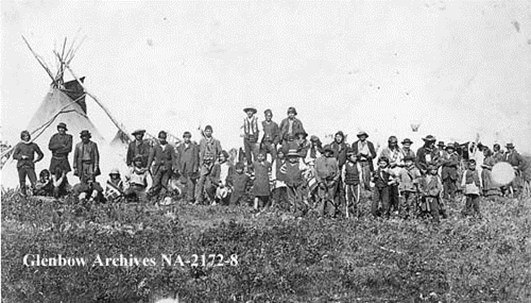 The origin of the Alexis Stoney lies far to the east, where the Assiniboine group detached themselves from the rest of the Siouan family. Sioux is an abbreviation of Nadouessioux, a French corruption of the name (Nadowe-is-iw) given them by the Chippewa; it signifies “snake” or adder, and metaphorically “enemy” (Blair 1969, Vol. I: 277). The Jesuit Relations of the seventeenth century document the schism within the Sioux parent stock and the existence of a subdivision, warriors of the Rock, who were called Poulaks and lived on the western shore of the Mississippi River. Inhabiting the country between the Poulak and the Assinipoulak were the Nadouechi or eastern Sioux.

The Relations also make note of Polacs living northwest of the Lake Superior missions. A letter from Father Marquette in 1669 refers to the “Assinipouars’ as follows: “The Assinipouars who have almost the same language as the Nadouessi (Sioux) are westward from the Mission of St. Esprit, being fifteen or twenty day’s journey on a Lake where they gather wild oats and fish are very plentiful...I heard that there was in their country a great River heading to the Western Sea and a Savage told me that, being at its mouth, he had seen Frenchmen and four large canoes with sails (Laurie 1957-59, Vol. I: 4).

Umfreville (1790: 101-102) provided a description of the state of the Hudson’s Bay Company fur trade and the state of knowledge on the native people at the time of writing. He confirms that in the latter part of the eighteenth century the Assiniboine were a numerous peoples, scattered over a great extent of country.

"The Sauteux have been from time immemorial at war with the Sciews, a populous nation inhabiting the country about the head of the Mississipi. It would probably be needless to enquire about the origin of their wars, as they have not the least tradition respecting the first causes of their ruptures. We may, however, suppose that they first quarrelled about their boundaries and renewed encroachments upon their respective hunting grounds...They assert as an undoubted fact that, formerly, the Sciews possessed the greatest part of the country, but, in course of time, as population increased, they emigrated to the westward in search of subsistance, where finding a vast uninhabited country, a milder climate and abundance of game, they remained and took possession of it, leaving behind only a few tribes, more attached to their native land...." 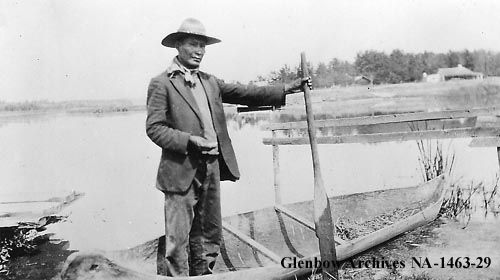 The Sioux or Dakota were described in the historic records as the most powerful group in the country. Two major divisions were recognized, the eastern sedentary Sioux who dwelt along the upper Mississippi River and the western or nomadic Sioux dispersed through the immense plains of the West to the north of the Missouri, extended their inroads and their hunting as far as the Rocky Mountains...(Blair 1969, Vol. I: 160-161). However, Carver (1778: 59, 80) indicated that in the 1760s the Sioux were comprised of eleven bands. They were originally twelve; but the Assinipoils some years ago revolting, and separating themselves from the others, there remain only at this time eleven...The Assinipoils, who revolted...amount to about three hundred warriors.

Alliances between the Assiniboine and Algonkian speaking groups such as the Saulteaux (Chippewa/Ojibwa) and the Cree are also of some historic time depth. This [Sauteur] tribe is divided...Those who left their natal soil made an alliance with the Nadouaissioux, who were not very solicitous for the friendship of any one whomsoever; but, because they could obtain French merchandise only through the agency of the Sauteurs, they made a treaty of peace with the latter by which they were mutually bound to give their daughters in marriage on both sides. That was a strong bond for the maintenance of entire harmony (Blair 1969, Vol. I: 276-277).

The terms and conditions of the Sioux-Cree peace treaty were described in detail by Radisson (Adams 1961: 140). Of particular interest is his (Adams 1961: 136, 142) description of the role of the ‘Elders’ in the ceremonies and associated feast.

"Some thirty young men of the nation of the Beef [Prairie Sioux] arrived there, having nothing but bows and arrows, with very short garments, to be the nimbler in chasing the stags...After one takes his bow and shoots an arrow and then cries aloud, there speaks some few words, saying that they were to let them know the elders of their village were to come the morrow to renew the friendship, and to make it with the French...Their drums were earthen pots full of water, covered with stag’s skin; the sticks like hammers for the purpose...The elders are about these pots, beating them and singing." 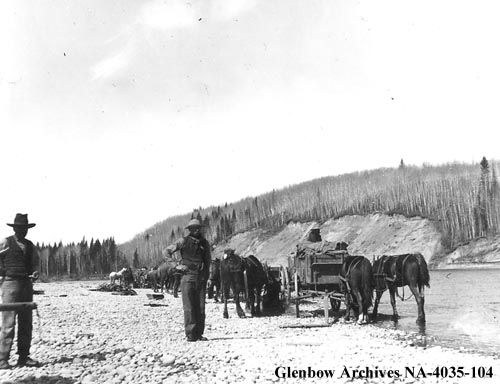 Based on the records of fur traders and explorers in the seventeenth century, it is apparent that the Assiniboine had either ventured westward or were in occupation of lands far to the west of the original Sioux homeland. For example, according to Lowie (1909: 7), almost a hundred years prior to Carver’s observations, i.e. 1660s, the Assiniboine had resided about the Lake of the Woods and Lake Nipigon. It is Laurie’s (1957-59, Vol. I: 6) contention that the ‘Mountain Poets’ encountered by Henry Kelsey in 1691 were Stoney from the upper North Saskatchewan returning to their regular haunts in that quarter.

La Vérendrye’s (Burpee 1927) journals, letters, and memoir spanning the period between approximately 1730 to 1760 provide insights into the distribution and complexity of exploitive patterns by native American peoples from the perspective of the Lake Winnipeg area. Burpee, who edited the manuscripts, accepts the establishment, by M. de Niverville, of La Jonquière* near the Rocky Mountains on the Saskatchewan River in 1751. Further, Saint- Pierre (Burpee 1927: 34) states that It appears that the Assiniboin, meeting a party of Yhatchejllini at fort Lajonquiere, after smoking the calumet with them, treacherously attacked and slaughtered the entire party with the exception of a few women and children, whom they carried off as prisoners. Documentation of Assiniboine as far west as the Rocky Mountains at this early date is significant to the development of the distinct ecologically adapted groups. Further evidence supporting Assiniboine familiarity with the western plains is found in the records of Henday’s travels in 1754 (Burpee 1907) and Cocking’s (Burpee 1908a) journey in 1773, along the Saskatchewan River, encountering increasingly greater numbers of Assiniboine tents as they pushed west.

Anthony Henday (Burpee 1907), upon his arrival at the Muscuty Tuskee in the vicinity of Moose Lake, Manitoba, indicated that the term ‘Muscuty’ was synonymous with Assiniboine. However, it is important to note that the region of the ‘Muscuty Plains’; was, in Henday’s time, used jointly by the Assiniboine, Mekesue, and Blackfoot. Henday continued through Assiniboine territory west to the region of present Battleford on the Saskatchewan where he met the Mekesue or Eagle Indians. ‘Archithinue Lake’ was the westernmost feature visited by Henday. Burpee (1907: 347) identifies this lake as Devil’s Pine Lake near Red Deer, Alberta. According to Burpee (1907: 347), both Devil’s Pine Lake and Devil’s Pine Creek are referred to as Ghostpine on some maps.

The Mekesu are identified as a band of the Assiniboine and represent one of the earliest, recognized, distinct groupings of the Assiniboine. The Mekesue or Eagle Eyed Indians were also known as Migichihilinious, and appear as a distinct trading entity at York Factory since 1755. They derived their name from the abundance of eagles in the area which they resided.

Cocking, in 1772, mentions the Mikisew Wache or Eagle Hills, and a small stream called Mikisew or Little Eagle Creek, both of which are well known landmarks on the North Saskatchewan River (Burpee 1908a: 105,332). It is interesting to note that the ‘Snake’ Indians’ are purportedly in possession of the Eagle Hills in 1740 as told in the tale by Saukemappee in which the Snake, on horseback, battle with Piegan armed with a few guns from the Cree (Hopwood 1971).

Alexander Henry the Elder (1809: 279-286) met with a band of Assiniboine on the Saskatchewan, and participated in a feast honoring the dead. Apparently having had no previous communication with traders, they prevailed upon Henry to loan his kettle for the feast. The feast was accompanied by great ceremony: an initial formal verbal invitation to all of the camp inhabitants, followed by ceremonial weeping, and the serving of a bison tongue to each guest by the chiefs. Henry (1809: 273-299) had come to the see the plains and after commenting on their extent he described the occupants.

"The Indians, who inhabit them immediately to the southward, are called Osinipoilles, or Assiniboins...With regard to the country of the Osinipoilles...it lay between the head of the Pasquayah, or Sascatchiewaine, and the country of the Sioux, or Nadowessies, who inhabit the heads of the Missisipi. On the west, near the mountains, were the Snake Indians and Black feet, troublesome neighbours, by whose hands numbers of his warriors fell...The Osinipoilles have many villages, composed of one to two hundred tents each. Few exceed the latter number. They often go to the mountains, on war-parties, and always on horseback...The horses of the Osinipoilles were originally procured from white people, with beards, who live to the southward; that is, the Spanish colonists, in New-Mexico."

Of interest is Henry’s (1809: 286) comment that The Osiniopoilles are the Issati of the older travellers, and have sometimes been called the Weepers.

* Some controversy surrounds the founding of Fort Jonquière. Bryce (1911) suggested that it stood on the present site of Calgary. Burpee (1908b), however, suggested that it is equally probable that the fort was located on the North Saskatchewan River above Edmonton. MacRae (1912) indicates that because of the appelation ‘Des Prairies’ applied to Fort Lajonquière by Louis Bougainville in 1867, it would be more appropriate for the fort to have been located on the South Saskatchewan on the plains